Project SaRoCy – “Delineating probable sea routes between Cyprus and its surrounding coastal areas at the start of the Holocene: A simulation approach“ – seeks to offer novel insights, based on physical/environmental modelling and computer simulation, into the possible prehistoric maritime pathways between Cyprus and other Eastern Mediterranean coastal regions at the boundary between Terminal Pleistocene / early Holocene (Epipaleolithic / early Neolithic), a critical period for understanding the origins of the early visitors in Cyprus in connection with the Neolithic transition.

Project SaRoCy is implemented under the “Excellence Hubs” Programme within the “RESTART 2016-2020” funding framework for Research, Technological Development and Innovation (RTDI) administered by Cyprus’s Research Promotion Foundation. Programme “Excellence Hubs” aims at promoting, bottom-up, scientific excellence through funding frontier research projects, possibly intersectoral and interdisciplinary, in cutting-edge fields. The Programme also aims to contribute to the creation of growth prospects for Cyprus’s economic development and to tackle social and other contemporary challenges. The SaRoCy project proposal was ranked 2nd (score 14.52 / 15) out of a total of 65 proposals submitted to the “Social and Humanities” scientific area of the 2019 “Excellence Hubs” call. SaRoCy will run for 24 months with an overall budget of €150k, mainly allocated to young researchers participating in the project.

Project SaRoCy responds to the frontier research requirement of the “Excellence Hubs” Programme by aiming to create new knowledge on a topic that has recently attracted global archaeological attention within the broader context of island and coastal archaeology. SaRoCy brings together an interdisciplinary team of experts in physical and environmental modelling, archaeology, geospatial analytics and geocomputation, seeking to form a Cypriot “excellence hub” on a key emerging research theme in prehistoric archaeology, that of seagoing/seafaring modelling/simulation within the context of human-(paleo)environment interactions.

This project is being funded by: 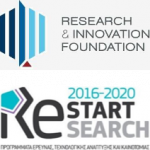